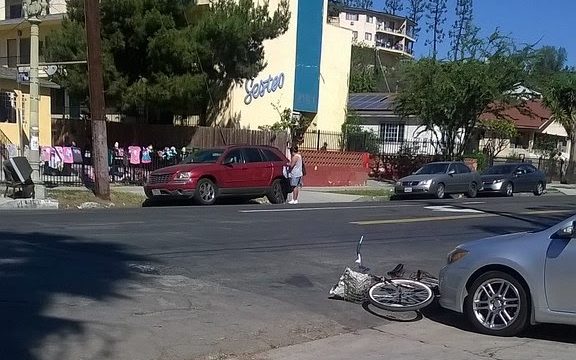 Drivers ’expectations, higher speeds as a result of less congestion, large infrastructure gaps and systemic incrimination of pedestrian and road cyclists contributed to the alarming rise and peak deaths of people injured and killed while walking or cycling. Researchers.

Whether for fun or just to get from point A to point B, Americans have been riding more bicycles, and thanks to COVID-19, this pattern has only intensified.

As more and more people ride bicycles, we have also seen a historic increase in the number of people injured and injured or killed by vehicles while walking or cycling. Researchers have delved into this alarming trend and factors that may contribute to this pattern, and at the same time, municipalities are rethinking road safety or zero-vision strategies.

Pictured left: An open street in Georgia. Photo by Joe Flood Via Flickr.

Research from the University of Toronto Emphasized a worrying trend of drivers not recognizing the identification of cyclists or pedestrians, especially at intersections and intersections. “The results were quite surprising,” said Professor Byrne Dunmez. “We did not expect this level of attention deficit, especially since we chose a group that is considered a low age group with a risk of crash … Drivers need to be more careful, perform tests over the shoulder and do it more often … Pedestrians and cyclists take: The drivers do not We see you. “

They continue to raise the assumption that there is increased intensity and diversity of drivers ’attention requirements, including signage, diverse means of transportation and their evolving technology, and the presence of more cyclists and pedestrians. (Others noted that the increase in deaths was accompanied by an overall increase in speed during the first half of the epidemic, when the streets emptied, showing the link between speed and a larger number of deaths.) This demand for attention contradicts the complacency of drivers, many of whom are not used to And cyclists, and now they are having a hard time adjusting. Making the situation worse, the infrastructure of pedestrians and cyclists that can hint to drivers about the need to make room on the road is inconsistent, making it difficult (not easier) for drivers to identify when they are sharing the road.

The need for consistent infrastructure for pedestrians and cyclists is a dual problem. One, road planning and transportation policies make the safety and comfort of cyclists and pedestrians secondary to the vehicle, and at times, normal behavior of cyclists and pedestrians is considered manifestly illegal, according to Peter Norton’s book. Combat movement: “In the early days of the vehicle, it was the drivers’ job to dodge you, not your job to dodge them … but under the new model, the streets became a place for cars – and as a pedestrian, it’s your fault if you get hurt.”

It encourages false assumptions about what belongs and what does not belong to our roads; As if streets were not meant to be shared with other users. If drivers assume pedestrians and cyclists should not be on the road, they are likely to be on their guard.

Picture on the left: a poster against the walking of Jeeps, created in 1937. of Wikipediahe Commons.

Second, according to A study by JM Barajas‘, The existing engineering, education and enforcement approaches to Vision Zero do not address the root of the problem with the fatalities in the movement of pedestrians and cyclists who are over-represented by people of color. This disproportionate impact is a result of the failure to invest in safe bicycle and pedestrian accommodation in marginalized communities.

Adding bike paths and sidewalks will not suffice. Crime safety is another issue that worries colored people, who often choose to ride in corridors with higher visibility, and this is where bike paths and sidewalks are rarely considered because of the impact on the sacred violation by traffic engineers of speeding. Instead, this necessary infrastructure is usually located on low-volume roads that have less public visibility. And for those who make bicycles, they are subject to police harassment, like Cops are more likely to stop black cyclists Than white cyclists.

Since the increase in the number of deaths from traffic during the plague, pedestrians and cyclists have been killed Gets more visibility. The way we respond to this issue is important. Will we continue to push only for ineffective traffic enforcement, which disproportionately harms colored people? Will states and localities continue to push for educational campaigns that do nothing to address the root causes of drivers’ inattention? Will we finally treat unsafe designs as a major culprit? Under the Infrastructure Bill, we can easily raise the dial regarding these failed approaches and argue for progress, even as the dead continue to worsen.

What pedestrians and cyclists really need is no more tickets for walks or lectures on wearing reflective equipment. They need infrastructure that will consistently make room for them, prioritize their safety and comfort over vehicle speed, and that provides better visibility to all road users as they mingle with traffic, so when drivers have to share the road, it will not arrive. As a surprise.