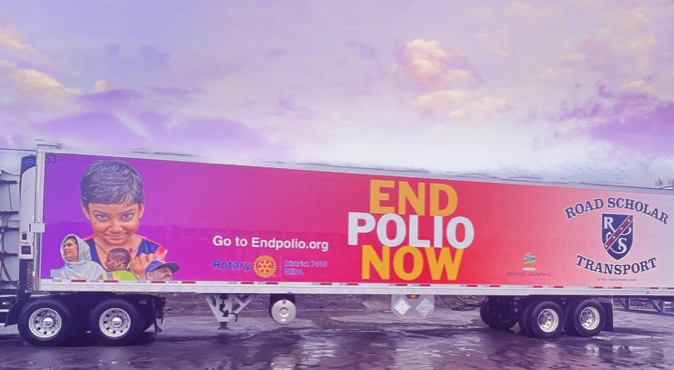 We recently spoke to David J Palmer, PolioPlus Chair, Rotary District 7410, who gave insight into the disease as well as creation of this awareness truck:

The idea came to mind when on a road trip to Texas in 2019 with my father for his Vietnam War unit reunion. I saw some similar motifs on a commercial tractor trailer and thought why not in our Rotary District? The design idea was partially developed from a similar truck I found online from a Rotary District in California and the children are from a Rotary International media source and / or the Global Polio Eradication Initiative (GPEI) [https://polioeradication.org/, https://www.rotary.org/en]. The children are taken directly from these sources.

Polio is a vaccine preventable disease that is predominately a childhood disease. Until the mid-1950s, it was very common in the United States and paralyzed thousands of children every year. Many of those children survived and today suffer long term health issues as a result of Polio. The last major outbreak of Polio occurred in about 1977 in Lancaster County Pennsylvania, so it is somewhat appropriate that this effort by Road Scholar’s firm is taking place in PA. Since the late 1980s, Rotary International has been pursuing a world-wide effort (it began in the Philippines) to eradicate Polio from the face of the earth. When accomplished, it will be only the second such disease eradicated from the face of the earth; the first such effort being smallpox.

To date, there are only two nations on earth where the wild polio virus still exists (endemic) – Afghanistan and Pakistan. One can imagine the challenges faced with eliminating it in these two nations, but the effort does continue with some success. To date, one case of the wild polio virus has been reported in each country in 2022. Once a nation has zero (0) cases for three consecutive years it is considered eradicated. Two years ago, this eradication occurred on the African continent, with the last nation (Nigeria) riding itself of the wild Polio virus!

We like to emphasize that Polio is only a plane ride away and indeed, it periodically shows up in urban sewer systems (Brazil, Israel, etc.), when surveillance teams do their periodic inspections of public sewage. When that happens the GPEI kicks in with aggressive interdiction actions. The GPEI includes Rotary International, The World Health Organization (WHO), The Bill and Melinda Gates Foundation, and numerous other public and private government and non-governmental organizations (NGOs).

Finally, I am THRILLED that Road Scholar Transport is interested in helping us (Rotary) pursue this effort. Road Scholar’s effort is unprecedented in NEPA to my knowledge. We have another trucking company in the Weatherly area that has expressed an interest in doing something similar, according to the Weatherly Rotary Club. It would be personally satisfying to see such trucks traveling all over the country.

For more info. visit Endpolio.org and stay tuned for what awareness truck will be joining our fleet next!