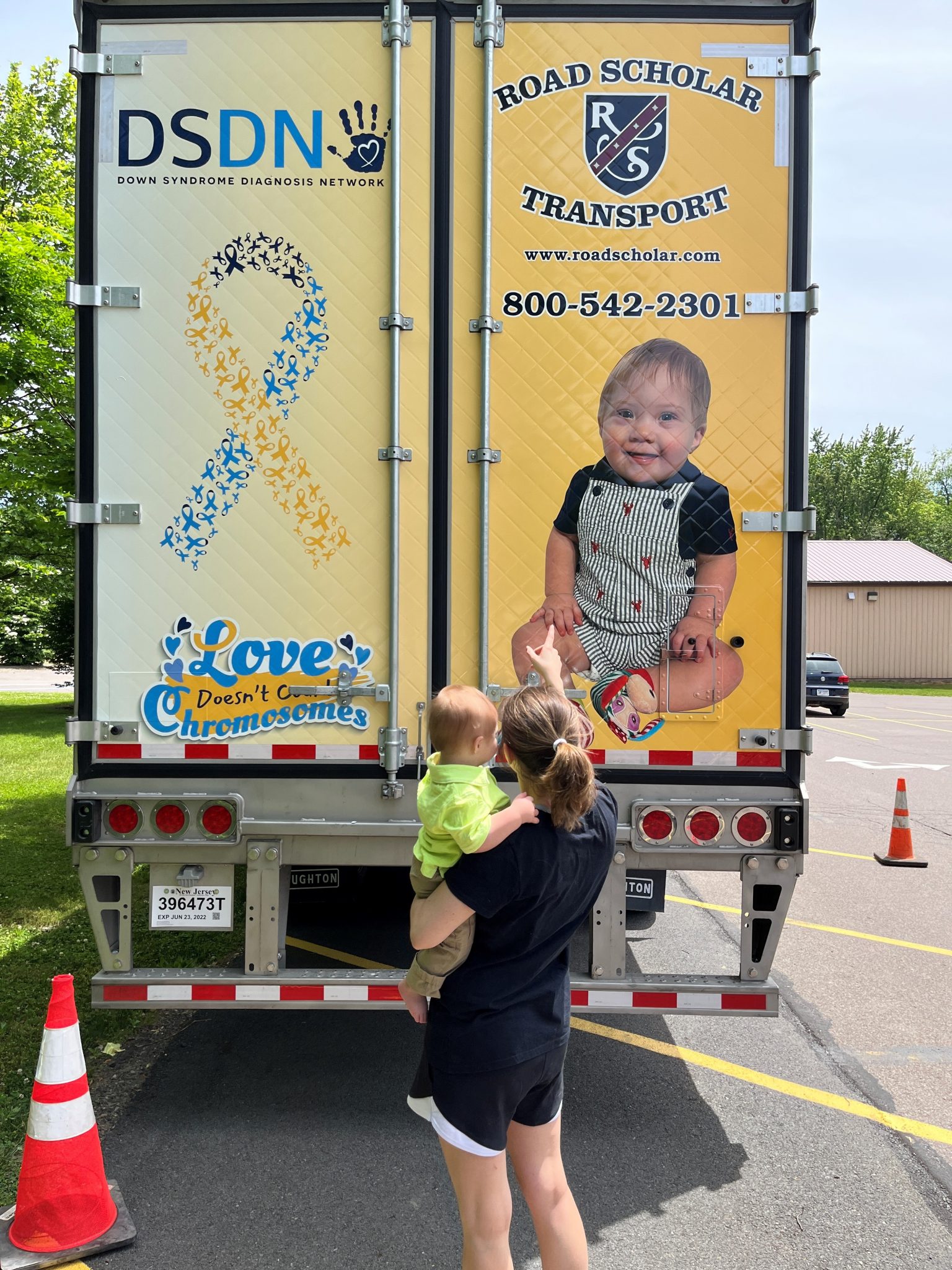 I first started working for Road Scholar over a decade ago. Since day one, I was always taken back by the company’s awareness program, started years ago by our President Jim Barrett. I’ve interviewed and written about each trailer as it came onboard, never realizing that someday I’d be sharing my own story.

It was always a dream of mine to have a baby of my own and having undergone two surgeries for severe endometriosis, was told that there was a chance I would not be able to, so I was extremely excited to find out that I was pregnant with my first child in 2021.

I’ll never forget the day that I went in for my 10-week ultrasound and was told that something was wrong… fluid was detected on the back of the baby’s neck and I needed to immediately see a high risk doctor that day. Hearing this, I passed out, facing every mother’s nightmare, that their child was in danger.

After a Chorionic Villus Sampling (CVS) test, in which a needle is inserted into the uterus, removing chorionic villus cells from the placenta, it was confirmed that my baby was 99% likely to have Down syndrome (trisomy 21), having found three copies of chromosome 21 in each metaphase cell. 1 in 700 babies (or less than 1%) are born with this.

I can still remember the very spot where I was standing when I got the news. I remember holding it together and then breaking down crying as I told my husband and family. We did not know much about Down syndrome, but we did know one thing, that was our baby and we would do everything in our power to give him the best life possible along with all the opportunities to succeed that we can. Fortunately, we were blessed with such a supportive family that told me they would be there every step of the way.

As I mentioned, I did not know much about Down syndrome, all I knew is what I saw in passing and that was that they were the most loving and happiest kids you could ever meet. So I did what every person does. I immediately went to the Internet to research. I learned that there were three types of Down syndrome: Trisomy 21 (the most common, consisting of about 95% of cases in which there is an extra chromosome 21 in every cell), Translocation (around 3% where the additional chromosome is attached to another instead of on its own), and Mosaicism (around 2%, in which only some cells contain the extra chromosome).

There are certain physical features that Down syndrome people have in common including slanted eyes, short neck, absence of a nasal bone, small ears, a protruding tongue, short stature, white spots in the colored part of the eyes, weak muscle tone, and a single crease on the palm of the hand.

There are certain conditions that people with Down syndrome are more susceptible to as well including vision and hearing problems, thyroid issues, sleep apnea, gastrointestinal problems and heart problems to name a few.

Having now a high-risk pregnancy, I had to travel to a high-risk hospital where the baby was constantly monitored as there is a higher risk of miscarriage or still born. Back in 1983, the typical life expectancy of someone with this disorder was 25 years old. Today, that average increased to nearly 60 years old and getting better with increased awareness and intervention, so it came as a hard blow to me when I was immediately hit with the question of “what do you want to do”? Here I was still trying to get over the shock and now being thrown a moral question and decision my husband and I had to make. Not to discuss religion but I knew we had been given this baby for a reason and I would do anything to protect him.

After a few appointments, we found out that our little boy, who we named Logan, had a heart defect, very common among Down syndrome babies in which 50% have some type of heart problem, that would require open heart surgery between 4 and 6 months old. Again, we were asked the question, “what do you want to do?” At this point, I looked the doctor in the eyes and said, “please stop asking me that.” I proceeded to ask how many of these babies are aborted and the answer was 60-90%. I look at my little boy today who is thriving and want to break down crying because I can not even imagine life without him. I was blessed that he was born WITHOUT a heart defect and without many of the major features that define Down syndrome. He is missing a nasal bone and his eyes are slightly slanted but to me, he is absolutely Down Right Perfect.

One of the biggest things I can say to those who just received a diagnosis is that it is OK to go and read and educate yourself; however, every child truly is different. The one thing they have in common is that they are all truly a blessing. They are no different than any other child. My little boy laughs just like any other baby, perhaps even more, he loves like any other child, perhaps even harder, he plays, has his own little personality that can brighten even your worst day, and is excelling. Like any child, some things come easier than others, but he is very determined and eventually hits those milestones which make them even more special.

Get into early intervention if you can. It does wonders and is never too soon. Logan started early intervention at just a few weeks old. At the time, I was asked “do not you want to wait and see what he can not do first,” to which I replied, “no because I do not want him to ever get to that point.” I wanted him to hit the ground running and it was the best thing we did.

While the Internet is a great source of knowledge, it can be very scary as well. I highly recommend getting connected to those who are going through or have been through the same experience as you. When I first found out the news, I joined the Down Syndrome Diagnostic Network on Facebook. I was immediately taken back at the kindness of everyone on there. I met some truly wonderful people who were willing to help in any way possible from giving support, to sharing their knowledge, to just being a friend. They sent me a welcoming package filled with books, clothes, toys, and it was here that I learned that I was going about it all wrong. It was not “down” syndrome… it was “up” syndrome.

On June 4thI was overcome with mixed emotions of excitement, pride, tears, and sheer joy for Road Scholar Transport to debut its newest awareness truck at Logan’s first birthday party, On the Road to Embracing Life. Decked out in yellow and blue, the awareness colors of Down syndrome, Road Scholar’s truck is on the road, raising awareness for the Down Syndrome Diagnosis Network and showing the world that “Love Doesn’t Count Chromosomes,” a saying that my family wore on a bracelet around our wrist for my entire pregnancy. I’m so honored and grateful to have Logan’s picture on the truck and to work for a company who cares not only about their employees and their families, but for every person affected in one shape or form by one of the dozens of causes in Road Scholar’s awareness fleet.

Check out the story FOX56 did on Logan’s first birthday party on June 4, 2022: https://fox56.com/news/local/logans-first-birthday-party